I started this project backwards, actually. I was at our florist, Flower Allie, and she had an old sign that was... well... ugly. It wasn't something that she bought, but rather created in the spur of the moment. It was for Valentine's Day and placed on the street side with ribbons and balloons.

So, while I was there, I stole her sign. 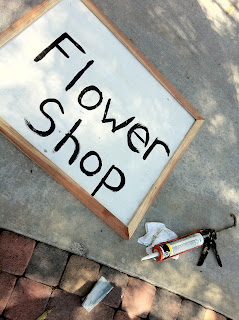 I took the "Flower Shop" sign and went to Home Depot. The fabulous men there helped me with my framing! I brought it back and sealed the edges and corners. 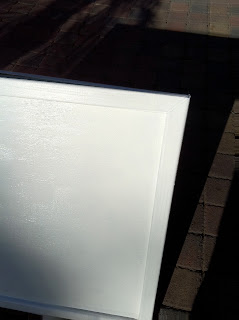 I painted it white... all white to start the project. I was thinking that my daughters would paint and create an awesome sign for me and for her. Unfortunately, they were way to busy and I didn't have the heart to ask them.

So, Yikes!!!
I now have a white framed board and I really can't paint... at least not well and definitely not to show to anyone. I starting thinking and I don't know how but "decoupage" just popped into my head.
Ahhh haaaa, a solution to my problem. 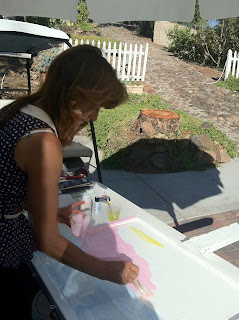 I began by painting the board a third yellow, a third pink and a third green. I took an old towel and blotted the paint and then let it dry. 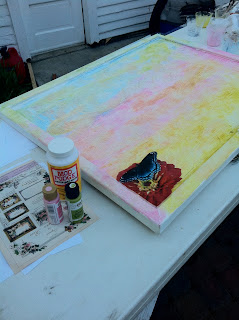 I then started cutting out flower pictures from EVERYWHERE! It was a blast. I thought I had enough but then when I began, it was so deceiving. My daughter, Rachell said  "if you are cutting wood for a fire, you cut way more than you think you need." Hmmmm. She was right! 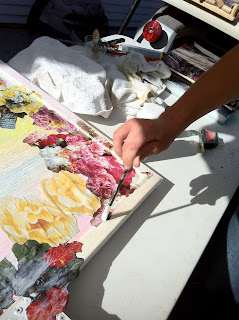 After each flower, I lathered it with the decoupage glue, Mod Podge. It smelled and looked just like old fashioned, plain ole white glue! The difference was it dried in 15 to 20 minutes so I had to act fast!
Put the flowers down, make sure it was how I wanted it and then go...


Then, more Mod Podge over the entire piece to seal it. (It dries clear.) Take extra care on the edges and getting out all the bubbles! 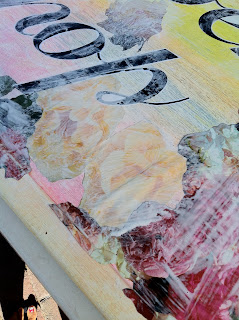 I painted the Mod Podge in all directions and then the final coat, I followed the flowers so when it dried it would have the texture of the flower! Who knew? Right? 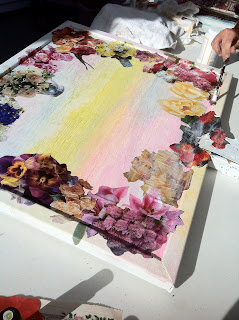 The lettering was next and then more Mod Podge and the Mod Podge spray sealer! 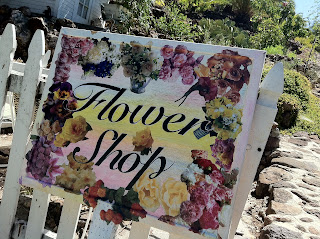 Yeahhhhh! The finished project! I loved it!!

So, a couple of things I would do differently....
I would find lots and lots and lots more pictures of flowers to cut before I begin!
I would put  more coats of sealant  to really preserve the artwork. (I did about 5. I would suggest at least 15! Really!)
I would definitely find a UV acrylic sealer rather than the Mod Podge sealer.

Posted by The Jones Victorian Estate at 10:08 AM